FIRST EVER WEBSITE TO DESCRIBE NADI ASTROLOGY IN DETAIL

I want to be more simple defining secret of nadis, their numbers and degrees in the Shodasa vargas (sixteen subdivision of a sign). Looks easy in calculation but difficult to apply practically. Nadi amsa is the 150th division of an ascendant. Ascendants rise for 100–120 minutes. The shorter ones, rise for about 40–60 minutes, depending upon the  savodya kaal, means time span of a rasi. Hence, the 30 degrees of rashi divided by 150 is 12 minutes of arc. On an average, if 2 hours duration is taken for each rashi, it amounts to 48 seconds in time duration (2 hours multiplied by 3600 and divided by 150 is equal to 48 seconds). So 12 min of an arc and 48 sec is one nadiamsa.

A nadi is a vedic and specific unit of time. It is so short that no two individuals are born in the same nadi, if they are by any chance, they have very similar lives. So, nadi ansha becomes incredibly accurate as it highly distinguishes each individual. The method of nadi ansha is enough to give significant details about the life trajectory of a person along with their identifying features. Coupled with the houses and signs, the nadiamsa technique becomes capable of giving astonishing details. The nadi anshas are numbered in clockwise direction in moveable rasi’s (aries, cancer, libra and capricorn signs) from beginning to end of rashi. In fixed rasi’s (tauras, leo, scorpio, aquarius signs) they begin from end to beginning of rashi anti-clockwise. In dual rashis (gemini, virgo, sagittarius, pisces signs) they begin from middle of rashi, to the end of rashi then continue from beginning of rashi and counted upto the middle of rashi. Role of nadi in predictive astrology is same as of DNA in biological life.

This is the list for each longitude of each subdivisions under all vargas, merge them all in ascending order. All of them will submerge into 150 longitudinal units. You will get total of 150. To make things more simple, you can group the vargas which merge with each other in part or full as under.

The above consist seven groups. Taking last one in each group as favourite, which covers all sub-divisions in it’s group. Let us list them individually.

Details of degreewise number of Nadis: So, first step is over after finding nadi serial 131.

Before we search nadi serial 131 in table two, we have to check the sign where mars is placed. This is placed in scorpio sign.  Scorpio is a fixed sign category. So, we will count nadi serial from the fixed sign column, which begins with number 150 as per fixed sign table 2.

In any fixed sign, first nadi ansha start with serial 150 in reverse order till the end of serial n.1

Here, you will find the name of nadi ansha of serial 131 is “mala” Check the table 2 for detail.

In similar way, we can find the starting degree of a house under study. Refer to bhav chalit chart as below. This is very important because nadi ansha or this degree can tell us which planet is having hold on this house.

Thus it can be seen that 1st nadi ansha in aries, the 150th nadi ansha in taurus and the 76th nadi ansha in gemini are the same. This will be illustrated in next table. First nadi vasudha, will fall in all signs of a chart at different degrees and with different characteristics. This may give better result for cancer sign while in leo sign it may not. Result of all nadi ansha are not same for a single sign. I will try to explain later with their properties and results.

Basic theory of nadi ansha is the starting degree of any house, which is the important factor for the result of this house. The planets which are strong for the beginning nadi of a house has influence on that house. All this depends on bhav chalit accuracy and integrating correct swodaya kaal in it. Other bhav chalit systems, the central houses like 1st, 4th, 7th and 10th houses has equal degrees like in KAS system. This fits perfect and has no difference as compared to other bhav chalit system. The main difference is lies on the factor when those systems are not following sawodaya kaal of the rashi belonging to the houses like 2nd, 3rd, 5th, 6th, 8th, 9th, 11th and 12th. In their system, division of rashi is made equal for second and third houses and respective opposite houses like 8th and 9th houses. Same pattern is followed for 5th and 6th house versus 11th and 12th houses which is incorrect. As such, we can not expect accurate strength of planets in a particular nadi in those system. Only KAS is widely trusted. Refer to the following examples for more detail how to apply bhav chalit taking a example chart.

Lagna nadi is very important. This is nothing but starting degree of lagna which falls in all 16 D charts. This degree or nadi tells about nature, individuality, and personality of a person. It is different than nine sectors, as we consider for lagna, sun and moon. In other words, lagna nadi will give us deep inside inner nature and reflects so many things about a person’s life. The sign lords of all sixteen divisional charts, where this degree falls, ascertain their strength in  lagna nadi. Suppose, if any planet is strong like Jupiter or Venus in a nadi, this purely means jupiter or venus are in uccha, mooltrikona or in own sign in more divisional charts. So our KAS system is not different than vedic astrology system. But this part is very sensitive, used for birth time rectification. One thing should be always kept in mind that powers of nadi’s are different in different signs thus these will have entirely unique qualities there and calculated on the basis of nadi’s net power. Like if a planet is in Prabha Nadi is at deg 3.23 i.e in Aries, Cancer, Libra or Cap sign will have different quality when same planet is placed in same nadi at the deg 26.35 in Taurus, Leo, Scorpio and Aquarius sign. Though the nadi is same but have different characteristics in different placement. [ READ MORE…]

There are many systems having their own theories how to calculate Bhav Chalit and fixing degree of each house. Some systems use equal degrees between first to fourth house ( 2nd, 3rd house) taking equal degrees of opposite houses (for 8th and 9th houses) . This calculation is not correct. Krushna’s Ashtakavarga System sheds broader light and provide insight on this ancient knowledge. How this can be correct when each sign has a different Sawodaya kaal ? Similarly, taking first house to tenth house in clockwise direction, there will be twelfth and eleventh houses. Opposite houses of these are fifth and sixth houses. Degrees of these two will be different as per their respective sawodaya kaal. For example, eleventh house degree should be different than it’s opposite sign fifth house, just because, every house has different sawodaya kaal. I will explain further but keep in mind this only for quality and quantum and not for timing. I will explain calculation part in my  two videos how to cast a Bhav Chalit chart plus application of nadi ansha.

For a sign, time to travel 30 degrees is equal to..??  In fact this is around 27 degrees and not 30 degrees.  Our earth has a constant speed and it does not change. But it is tilted 23 degrees on it’s axis, so sawodaya kaal of each sign is different. From sunrise to sunset, total sawodaya kaal of all signs is called “dinmaan”. Similarly, total sawodaya kaal of all signs in night time is called “ratrimaan” . Now adding up both are called “aaho-ratro” . Ignoring “aa” and “tro” from this word is called HORA, which we used as a hora chart taking sun and moon. So this is basically  full dinmaan – time from one sunrise to next sunrise. In hora chart, the moon portion is fourth house. This will signify our net assets, the second house. Hora of sun relates to third house, which will show prakaram of a person. This chart will be D-2, reflecting net assets and prakaram. In hora, no other planets are involved except sun and moon where as in trimsansha D-30 rest of five planets are involved. Hora is D-2 chart which signifies net assets and prakaram. 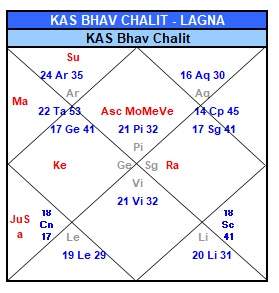 RELATIONSHIP OF SIGNS OF CHARAN (PADA) AND NAVAMSA

Each charan has the characteristics of a sign starting with Aries.

Therefore, the navamsa signs and the signs of the charan are the same.

This charan, we call D-9 ansha or nav-ansha. So, in which charan, karaka of any house is situated, is called karakansha.

If the rashi contains information about in which charan, planets are located, there is no need for a separate calculation of the navamsa. Navamsa signs and charan signs are the same.